ThePutnam County Rescue Squad began in 1952 and was established as a function of Civil Defense. Established in 1941, Civil Defense was originally developed to protect citizens from attacks and natural disasters. Following the Cold War, the Civil Defense focus shifted more from military type attacks to emergencies and disasters, eventually being replaced with the Federal Emergency Management Agency (FEMA) in 1979. The rescue squad was and is a volunteer unit working to help the Citizens of Putnam County during times of emergency or disaster. With primary duties of search and rescue, the squad was born with an old van, donated by the local telephone company and a dozen volunteer members at most, who had almost no equipment, official training, or certifications. 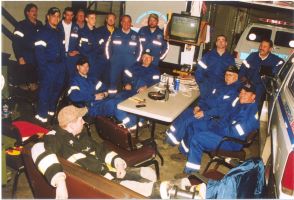 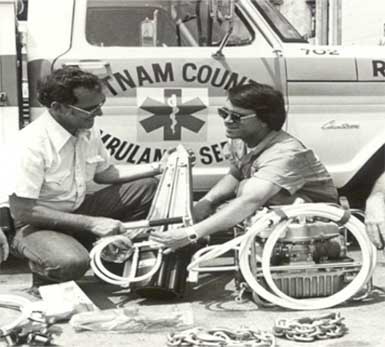 With the acquisition of a boat and trailer, Water Rescue was one of the first additional functions of the squad. Although, at the time, the function of water rescue was reserved for dragging waterways in search of drowning victims. Additionally added, as an emergency response service was extrication. Extrication is the practice of safely and swiftly removing victims from wrecked vehicles. It involved removing doors, bending and cutting on vehicle bodies to free entrapped victims. In the late 1970’s, the Rescue Squad obtained its first Jaws of Life, seen to the left, which was a vast improvement over hand tools for performing extrication.

In the past few years, other functions have emerged within the squad. Swiftwater rescue, called upon during flooding and for rescue stemming from accidents while people are using streams and rivers for recreation. A dive team, responsible for underwater searches for drowning victims, recovery of vehicles and other items beneath the water’s surface. The rope rescue team, specializes in rappelling/high angle/ mountain rescue, to gain access and retrieve victims from remote and often treacherous terrain. Special training in extrication also allows the squad to perform school bus rescue and extrication. A structural collapse and trench rescue team that specializes in confined spaces, unsafe structurally sound buildings, and trench cave-in rescues. Most recently the structural collapse team along with many other squad members was called upon during the March 2020 tornado event that affected so many in Putnam County. When someone’s loved one becomes lost and/or missing, the rural search and rescue team is tasked with searching for and finding the victim. The searches most often use basic land navigation and GPS navigation to cover large areas more efficiently. Putnam County contains a lot of rural communities and most of them have farming operations, the farm rescue team, are specially trained to deal with the large equipment often found on farms and the hazards that can be found on and around a farm to rescue farming accident victims. Additionally, Putnam County has numerous severe thunderstorms, heavy rainfalls, and the occasional tornado throughout the year, as a result, a team of storm spotters are often activated when a threat of severe weather is imminent to help local officials identify and locate the areas impacted by severe weather and to get notifications to the public as quickly as possible to give the citizens of Putnam County the most time possible to prepare. Most recently, the first responders, medically trained personnel ranging from Paramedics, EMT’s, to EMR’s are a team of individuals who respond along side Putnam County EMS. Often the first responders are the first on scene with a patient experiencing a medical or traumatic emergency and provide emergency medical care and stabilization until EMS arrives on scene.

The squad now has a total of 14 vehicles in four locations throughout the county for a more rapid response, 2 boats and 1 swift-water rescue raft, 2 four-wheelers, 2 Kubota UTV’s equipped with a Medi-Bed for patient transport out of rugged areas, 1 Polaris Ranger, and 4 equipment trailers all loaded with different types of equipment to enable the squad to perform advanced special rescue operations. 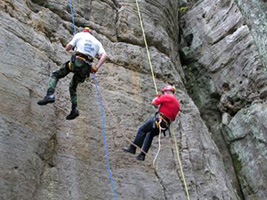 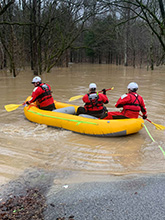 Today, the squad has grown to approximately 70 dedicated members who train vigorously and respond to calls for service at all hours of the day and night, 7 days a week, 365 days a year. On average, the squad responds to over 1200 calls of distress annually, with that number increasing yearly. Our members, who are dedicated volunteers, love their community and put forth their own free time and resources to be ready at all times when the call comes in! This causes members to take time away from their families and has a financial impact as well. Each member understands that any call for service can involve circumstances that are life-threatening to not only the victims of the incident, but also the rescue members as well.

Positioned in middle Tennessee, Putnam County is home of multiple state and local parks and other rural areas which encompass large areas of wilderness, occasionally, an accident will happen in these sometimes-remote locations and require the squad to respond to few calls per year. Additionally, with Interstate 40 running pretty much through the heart of Putnam County, from mile markers 304 to 268, the squad responds to numerous traffic accidents annually just on I-40 alone in addition to the local and state roads throughout the county. The Putnam County Rescue squad participates in mutual aid agreements with surrounding counties, and responds to other counties when requested to assist in any capacity necessary to assist local departments to gaining access and retrieving victims as safely as possible. 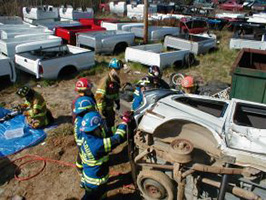